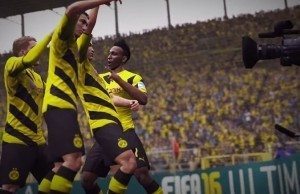 Borussia Dortmund makes the shortlist of the 10 Teams You can Use in FIFA 16 Demo. The German club who were not quite impressive last season have been included in the demo. Experience the new Dortmund squad with the likes of Marco Rues , Mikhitaryan and the new Belgian winger Adnan Janujaz . The Dortmund squad is filled with pace and are good on the counter attack, so when you play the FIFA 16 demo give Borussia Dortmund a try!