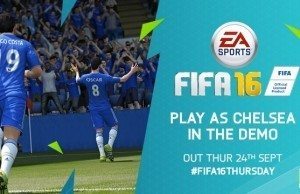 The Premier League Champions have also made it to the FIFA 16 Demo once again, Chelsea who went on to win the Premier League after five years and the Capital one cup. Chelsea have started the new season poorly but that hasn’t affected their FIFA 16 ratings at all as they’re still a solid team at the back and an attacking team at the same time.

Despite being out of form this season, Chelsea have what it takes to bounce back.