Chelsea cruised into the knockout stages of the Champions League with a convincing victory over Porto at Stamford Bridge.

An early own goal settled the nerves and sent the Blues on their way. Willian made absolutely sure of the result with an excellent second to clinch the tie.

The result secures top spot for the west Londoners and ensures they should have a more favourable draw in the next stage.

It was a much-improved performance for Chelsea and has eased the pressure on Jose Mourinho.

Here’s five things we learnt from the Group G clash:

CHELSEA ARE BETTER WITHOUT FABREGAS! 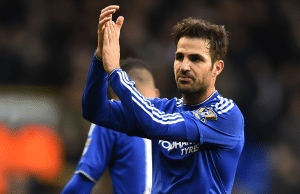 Chelsea were without Cesc Fabregas this evening as Jose Mourinho opted to play Ramires- Who was fit after injury- in the middle of the park.

The Blues looked a lot more balanced and Ramires posed both an attacking threat and a defensive shield.

The spaniard has been less then impressive this season with a string of horrifying performances. He may have just lost his place to the energetic Brazilian, who will be buoyed by his recent contract extension.

Cesc Fabregas has certainly lost his magic hat and Ramires will be going that it stays lost.