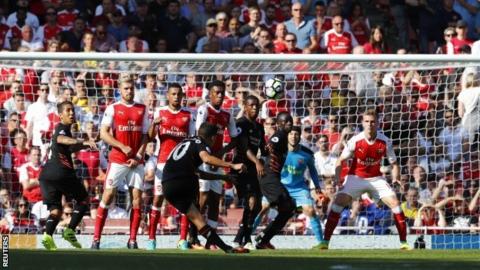 Liverpool fan gives his take on the game

Thank God the Premier League is back.

After a summer of international football, this weekend finally saw the return of England’s top division for another season, a season that’s set to be one of the most open we’ve ever seen, but until 4pm today, the opening fixtures were proving to be a bit of a letdown.

Step up Arsenal and Liverpool. When the fixtures were released in July, it was this fixture that stood out from the rest in terms of being a high profile game. Sure, Jose Mourinho, Antonio Conte and Pep Guardiola all had their first games for their respective clubs, but a clash between to league heavyweights on the opening day is always what you want to see.

The game started a little bit slow, after being so optimistic going into the game, I was very disappointed by Liverpool’s first half performance overall. We were sloppy, uncreative and lazy at times. One man in particular was dreadful, Alberto Moreno, but I’ll talk more about him later. The fact that we got into half time level was more than we deserved, but when you have special players on the pitch that can drag you out of a tricky situation, sometimes you get more than you deserve, and that’s exactly was Phillippe Coutinho did, his freekick left me speechless.

Up until that point, it was obviously very disappointing. Arsenal had dominated the possession and the play, they had created more chances, and they were exploiting a huge weakness in our back 4. Alberto Moreno was dreadful today, the penalty he gave away was such a messy challenge. As the ball comes back into the box, Moreno is clearly ahead of Walcott and is winning the race to the ball, but still chooses to go to the ground in an effort to get the ball away. The goal itself is another error, his positioning is ridiculously bad, he seemed to be underestimating the pace of Theo Walcott, and that lead to the Arsenal forward tucking away the opener.

The second half, for about 15 minutes, was completely different. It was overall a much better performance, but the opening 15 minutes of the second half once again showed us the tremendous quality that Liverpool have within them. It was particularly demonstrated by Coutinho again, who provided a lovely flick for Wijnaldum in the buildup to Lallana’s goal, and then went on to score the 3rd. Sadio Mane scored a delightful 4th with a very impressive and powerful run, followed by a great finish with his weight travelling away from goal.

It’s clear that defensively there is still work to be done. Today, Arsenal couldn’t claw their way back to 4-4, but our inability to completely close a game out like that shone through again. A better team like either of the Manchester clubs may have earned a draw today, and that’s something that shouldn’t be a worry.

It was a great result and again showed glimpses of what Liverpool can achieve this season if they can remain consistent. As a Reds fan, today was a massive relief with the strong pre-season we had, particularly with the good performance against Barcelona last Saturday.