Arsenal Football Club are not known for spending big on transfers, but in recent years, they have shown some severe financial strength in the transfer window, breaking their transfer record twice in two seasons.

The Gunners have recently transferred from Highbury to the Emirates Stadium and that took a lot of financial power away from the North London club, but with the stadium finally paid off, it’s time for Arsenal to start competing with the best in the transfer market. 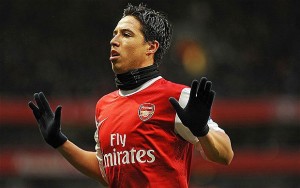 Samir Nasri starts up the list of Top 10 Most Expensive Arsenal Signings. Nasri joined Arsenal in 2008 from French side Marseille for £12 million.

After having a successful career at the Emirates Stadium, Nasri became yet another Arsenal player to swap red for blue as he joined Manchester City in 2011 for £25 million.