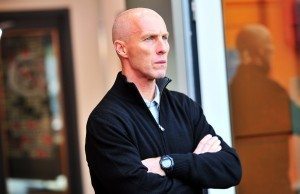 Former US National team manager Bob Bradley is also a viable candidate for the role at Villa.

Bradley is most famed for his five-year spell with the American side between 2006-2011, where he helped his home nation qualify for the 2010 World Cup in South Africa.

After leaving his post four-years ago, the 57-year-old has managed Egypt, and now Norway-based Stabaek, but could a job in England be next on Bradley’s agenda.