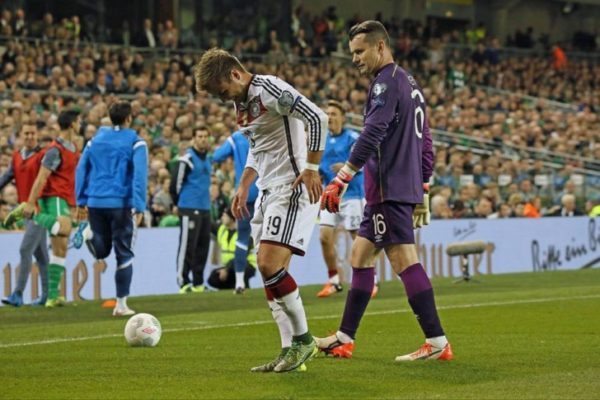 Bayern Munich’s Midfielder Out For 10-12 Weeks

Bayern Munich’s midfielder is set to miss both Champions League ties against Arsenal due to injury as he has been ruled out for 10-12 weeks with a groin injury sustained during 1-0 loss to Republic of Ireland.

Mario Gotze is set to miss his teams qualifying game against Georgia on Sunday with his team only needing a point to reach the Euro 2016 in France. The Bayern Munich man was ruled out for 10-12 weeks after sustaining an injury in the first half of the 1-0 loss against the Republic of Ireland.

The Germany winger was substituted in the 35th minute of Thursday night loss after he overstretched while battling for a ball with James McCarthy. This injury might prove painful for Bayern Munich because the midfielder has already bagged four goals for the San Mia San.

Mario Gotze could miss upto 14 matches for Bayern Munich including a double header tie against Arsenal in the Champions League.

Former Bayern Munich man Sebastian Schweinsteiger is also a doubt for Sundays qualifier against Georgia, a defeat for Germany could mean automatic qualification for Georgia and Germany dropping into the playoffs if Ireland and Poland draw on Sunday.