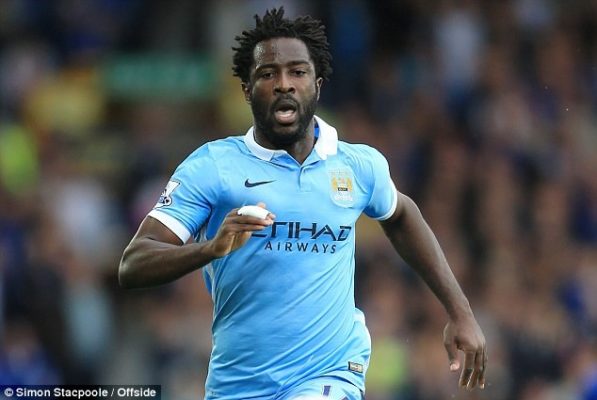 Wilfried Bony will miss Premier League leaders’ clash against Waford after suffering a nasty gash to the leg.

The Ivory Coast striker, who cost City £28million from Swansea, posted on Instagram a picture of himself wearing a large protective boot on Friday.

And manager Manuel Pelligrini has confirmed that he will sit out of City’s clash with newly-promoted Watford on Saturday but will be back following the nearby international break.

The Chilean also declined to comment on Wolfsburg’s Kevin De Bruyne, who is expected to become his next signing.

‘Unfortunately Bony had yesterday a cut in his leg of six to seven centimetres so he’s not able to play tomorrow,’ Pellegrini said before adding ‘I have no information,’ when asked about former Chelsea man De Bruyne.

Bony is the only recognised senior back-up to Aguero, but Pellegrini added that he was not in the market for another striker.

‘We have Kun (Aguero), Bony and Patrick Roberts so we are not looking,’ he said.