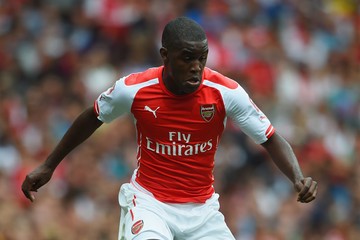 Arsenal forward Joel Campbell has joined Sporting Lisbon on a season-long loan for a remarkable fifth time in his Gunners career.

The news came as a surprise to Arsenal fans, after the 24-year-old had made 30 times for Arsene Wenger last campaign, and looked to have, finally, secured himself a regular place in Arsenal’s team.

However, more question marks have arisen about the Costa Rican’s Gunners future now that he has again left on loan, after a reasonable campaign in which he netted four times.

After completing a medical, Campbell announced the deal via his Twitter account, saying: “#oMundoSabeQue you should sign Joel Campbell!! @Sporting_CP” with the Portuguese giants responding: “@joel_campbell12 challenge accepted! Welcome to Sporting CP! #BemvindoCampbell”.

The Arsenal forward has previously left the Emirates for loan spells at Lorient, Betis, Olympiacos and Villarreal, but this will be the 24-year-old’s first spell in Portugal, and hopes to guide the club to the league title during his time at the club.

“I came to be champion! I want to came to create the best of impressions and repay the trust that was placed in me.” said Campbell. “It is true that I talked with Bryan Ruiz, who I spoke highly of the club.

“However, it was the support given by the president and the coach who helped make my decision,

“I only promise a lot of work. Sacrifice.

“Delivery to 100 percent and I think the results will come for you. I know what I can do and I hope everything goes well.”