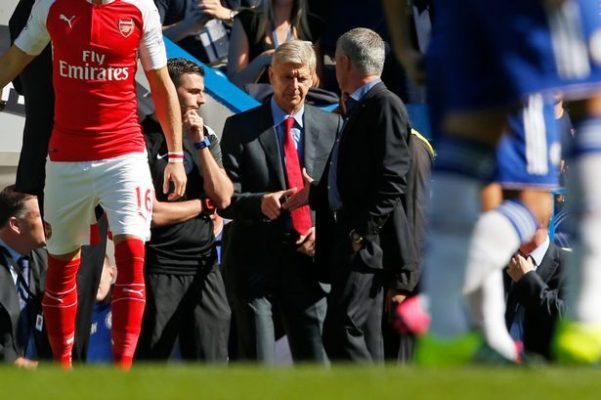 Chelsea ended their dismal run of results and got their Premier League campaign back on track with a feisty 2-0 win over London rivals Arsenal at Stamford Bridge.

A bad tempered first half erupted just before the break when Gunners defender Gabriel saw red for clashing with Blues striker Diego Costa, who was perhaps a little lucky to be on the pitch himself.

The champions made their numeric advantage pay after the break when Kurt Zouma nodded Chelsea ahead after a sublime Cesc Fabregas free-kick.

Any hopes Arsenal had of an unlikely comeback receded when Santi Cazorla was also shown red, receiving his marching orders for a second bookable offence after his mistimed tackle on Fabregas.

Eden Hazard made sure of the points when his shot deflected off Calum Chambers in stoppage time.

It would be unfair to say Mike Dean directly affected the outcome of this game considering that Chelsea were by far the better team before the first red card and had a legitimate penalty appeal turned down when Gabriel wrestled Hazard to the ground.

Here are the five things we learned from this game: 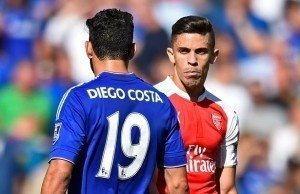 Diego Costa was at it from the word go, Costa went down and started waving an imaginary card to try and get Francis Coquelin booked… It wasn’t even a foul.

This was a sign of things to come and Arsenal should have been smart enough not to take the bait.

So when Costa had a bust-up with Laurent Koscielny and Gabriel, they should have been smart enough not to rise to it.

While Koscielny managed to keep his cool, Gabriel reacted with a petulant flick of the heel right under the nose of the referee and that was enough to get himself sent off.

Costa should also have been sent off, but dark-arts Costa’s offences ran under the radar of referee Mike Dean.

Its very difficult to have any sympathy for Arsenal. Every club in the Premier League knows what Diego Costa is like, to rise to it is nothing short of stupidity.