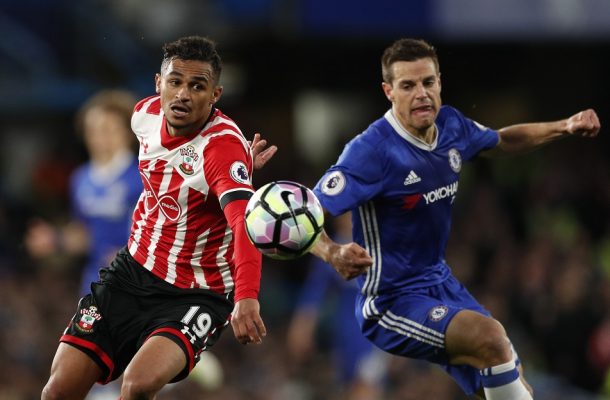 Our Chelsea vs Southampton prediction

We expect a Chelsea win at 1.36 with Unibet. Below you can read the reasons for our Chelsea vs Southampton predictions.

We expect Alvaro Morata to score first at 3.65 with Unibet

The Chelsea squad are favourites to win this match 1.36 with Unibet, with visitors Southampton priced at 9.50 with Unibet to cause an upset and take the three points at Stamford Bridge.

Antonio Conte’s men bounced back from last Saturday’s loss at West Ham by winning away at Huddersfield on Tuesday, but the Italian boss has all but conceded the league title already.

With Man City clear at the top and on a 14 match winning streak, Conte has all but admitted that it will be too hard to catch up even with over 20 games still remaining.

However, his team will continue looking for points in case City slip up. We’re backing them to get the win over the Saints on Saturday at 1.36 with Unibet.

Southampton have been uninspiring this season and tend to struggle in front of goal. They may make things difficult for Chelsea defensively, but are unlikely to pose too much threat going forward.

The Blues are likely to have Alvaro Morata back after he missed the win over Huddersfield due to fatigue. We’re backing him to open the scoring in this one at 3.65 with Unibet.

As for the correct score, a comfortable 2-0 win and clean sheet would do nicely heading into the busy festive period. This is our prediction, and it can be backed at a best price 7.00 with bet365.

Chelsea face Southampton at Stamford Bridge on Saturday afternoon. The Blues returned to winning ways at Huddersfield on Tuesday, and despite Antonio Conte more or less conceding the title, they will be looking for another three points here still.

Chelsea have not hit the heights of last season when they marched to the Premier League title, and Antonio Conte doesn’t seem to think they can catch leaders Man City. His recent comments suggest their priorities may be on other competitions after they were drawn with Barcelona in the Champions League earlier this week.

The Saints haven’t set the world alight under new manager Mauricio Pellegrino, who prefers defensive solidity to the free-flowing attacking football they have played in recent years. They’ve won just one of their last six games.

This will be the 100th meeting between Chelsea and Southampton. Chelsea have won 41 of their previous 99, with Southampton winning 30. 28 matches have ended all square. The Saints last won at Stamford Bridge in 2015, prevailing 3-1 when Jose Mourinho was in charge.

Out of favour defender David Luiz is out for Chelsea, although Alvaro Morata is expected to return after missing the win over Huddersfield due to fatigue. Southampton should have Shane Long and Cedric Soares available after injury.

Chelsea to win at 1.36 with Unibet