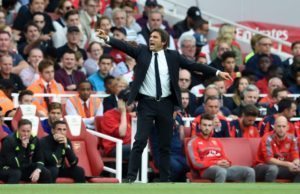 Chelsea boss Antonio Conte has revealed that he is struggling to sleep after seeing his sides poor form continue after losing to Arsenal on saturday evening.

The defeat on saturday means Chelsea have failed to win in their last 3 matches in the premier league. They were comprehensively beaten 3-0 by Arsenal at the weekend with Alexis Sanchez, Mezut Ozil and Theo Walcott all on target for the Gunners.

Chelsea have now slipped to 8th in the premier league following the defeat and are already 8 points behind league leader Manchester City.

Conte said: “I don’t sleep, sure. I don’t sleep. After this game, this defeat, it’s normal for me not to sleep. Not only one night, but for two nights. When I don’t sleep, I reflect. And it’s important to reflect.”

Chelsea’s crisis in defence continued at the weekend as centre back Gary Cahill made a horror back pass in the lead up to Arsenals opening goal.

Conte however has refused to pin the blame on any individuals and is determined that his side must improve collectively if they are to reach their top potential and become title challengers.

“It is important to show during the game how to be a great team, not only on paper.”

“I don’t want to talk about defenders, midfielders or strikers. Because I think we lose and we win as a team.

“We must continue to think in the same way, always. We understood – me first then the players – that this league is very tough.

“We must improve a lot of if we want to stay up and not in the middle of the table.”