What will be the Manchester City predicted line up for their clash against West Ham?

Predicted Line up vs West Ham will be tricky to tell. Pep has shown that he has trust in youngsters but he continues to rotate his squad around in the most unpredictable ways since the new campaign.

West Ham would not pose the greatest of threats to a dominant side like City but Guardiola cannot go with his best lineup, given the number of injuries on his side.

Kyle Walker will play his natural position at right-back. Zinchenko will be playing at left-back.

In the wings, we can expect Ferran Torres to make a late appearance while Raheem Sterling and Riyad Mahrez fill both the opposite flanks. Kun Aguero should lead the line after being out from the game for more than 5 months. 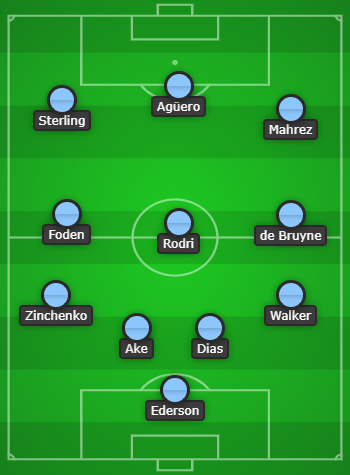 As for West Ham, they have now scored 10 goals in their last three Premier League outings and could score three or more goals in four consecutive league games for the first time since September 1928.

City have won nine and lost none of the last 10 meetings between the two sides across all competitions.

Ahead of Saturday’s clash between City and West Ham, we look at the matches the two teams have recently played –

Tonight’s match is only the 113th meeting between these two Premier League sides. The Cityzens have dominated with 58 wins while Hammers have managed 37 wins for themselves and the other 17 ended as draws.