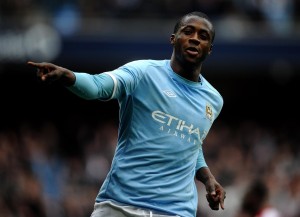 Yaya Toure is reported to be earning $15 million a year and has a net worth of $65 million.