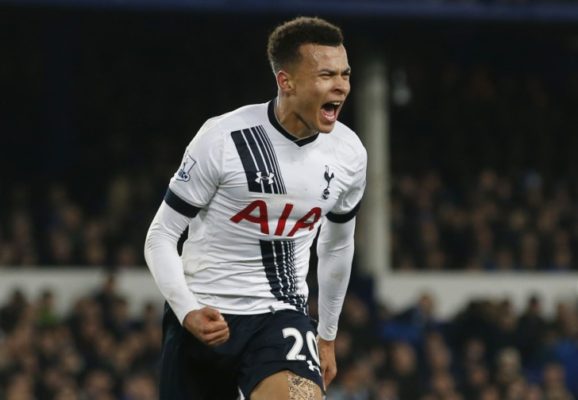 The PFA Young Player of the Year appeared to punch Yacob

Tottenham midfielder Dele Alli is facing missing the rest of the season, as the FA look into an incident involving the 20-year-old and West Brom midfielder Claudio Yacob.

On a tense evening at White Hart Lane, where Spurs knew they must beat West Brom to keep up the chase on league leaders Leicester, Alli was subject to a moment of controversy.

The England midfielder, who on Sunday night picked up the PFA Young Player of the Year award, clashed with the Baggies midfielder on several occasions, before Alli appeared to punch Yacob in the stomach in an off-the-ball incident.

And now the FA are expected to investigate the moment in question, with the prospect that the England star’s debut Premier League season could come to a sour end.

However, despite television cameras having picked up the incident, Spurs boss Mauricio Pochettino admitted he was yet to see exactly what had happened, speaking in his post-match media duties.

“I didn’t see. I heard some comments. I need to watch the game and the action, so I cannot say nothing.” said Pochettino.

The potential ban has come with ironic timing, with Spurs’ rivals Leicester having also seen one of their star men given a ban, with Vardy set to miss the club’s meeting with Manchester United on Sunday, after he was given an additional one-match ban from improper conduct.

“Claudio Yacob’s job appeared to be to get at Alli, and there was an incident before with a few words said.”

Tottenham head to bitter rivals Chelsea next Monday, before hosting Southampton and heading to relegation-threatened Newcastle on the final day of the season.