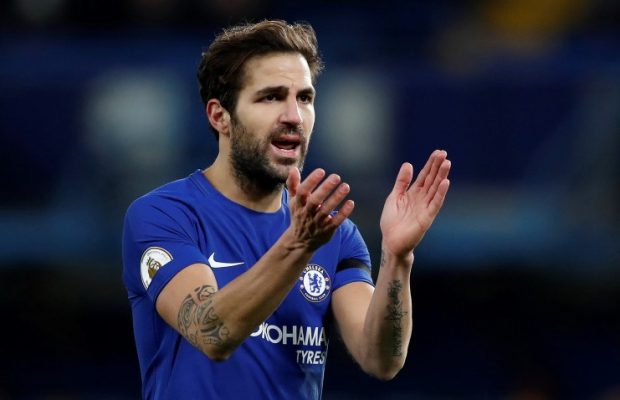 Despite being frustrated at his bit-part role, Cesc Fabregas has insisted that it is too early for him to make a decision on his future at the club. The 31-year-old played the full ninety minutes of Chelsea’s 2-2 draw against Mol Vidi FC in the Europa League on Thursday night.

The former Arsenal has slipped down the pecking order under Maurizio Sarri following the arrival of Jorginho and Mateo Kovacic in the summer. With Sarri preferring a three-man midfield, Fabregas has also faced competition from the likes of Ruben Loftus-Cheek and Ross Barkley for a spot in the eleven. The Spaniard has started only once in the Premier League this season against Wolves besides playing cameos off the bench against Crystal Palace and Everton.

Fabregas has been a regular in the Europa League for Chelsea where he has made 5 appearances in the group stages. However, his lack of involvement in the Premier League has left him to cut a frustrated figure on the bench.

Following the 2-2 draw against Mol Vidi, Fabregas said, “I know what my role is. Unfortunately, it’s not the one I want. I’m keeping it professional as usual.”

“But, I’m trying to do what I can. It’s a difficult situation for me, obviously.”

However, Fabregas, who has been at the club since joining from Barcelona in 2014, says talk of a transfer is premature.

“We’ll see what happens. It’s too early to talk about this now.

“I don’t give up. I’m not someone who you’ll see complaining or not giving his all because of that.