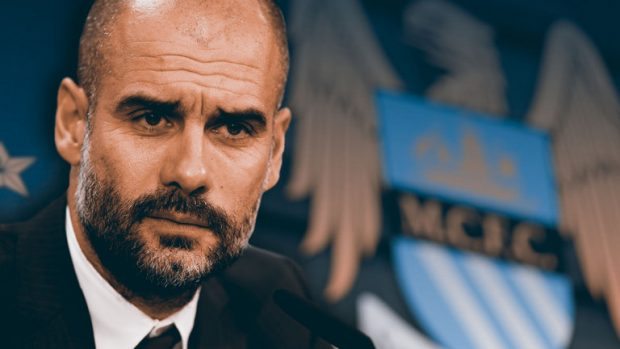 Manchester City boss Pep Guardiola is refusing to be drawn on the long-term futures of Sergio Aguero and Claudio Bravo.

“I am not thinking about things that are far away or individual players. The way that you have to play in the game [is what I am focusing on] to keep our rhythm going and our way of playing.

“It’s been much better in this last period that is what I feel and of course I have to try and get the players ready because we need all of them. That is all I am concerned about.”

“My opinion of Claudio remains the same,” he said.

“He is a top player, a top goalkeeper. He’s one of the best in the world. His long career speaks for itself.

“Football, of course, here is more particular, more crosses, more special things, but, of course, he is a top, top goalkeeper. For me, there’s no doubt about that.”

Asked about Aguero’s comments last weekend, where the striker said a decision on his future rests with the club, Guardiola said: “Five minutes after those statements, Man City released a note saying the opinion of the club and manager about Sergio Aguero’s future.”

Another player who has found himself on the fringes of the action of late is Nolito, signed by Guardiola in a £14m deal from Celta Vigo over the summer.

Asked if there was anything more Nolito could do to get in the team Guardiola said: “Nothing. He doesn’t need anything more, just the manager to play him.

“Basically, we have three players in top form – Leroy Sane, Raheem Sterling and Gabriel Jesus – and that’s the only reason.”

Guardiola was also asked during the news conference about his thoughts on Phillip Lahm’s announcement earlier in the week that he would retire at the end of the season.

“Football is going to miss one of the best players ever. He can play in 10 positions, no problems because he understands the game perfectly. It was a huge honour for me to be his manager.