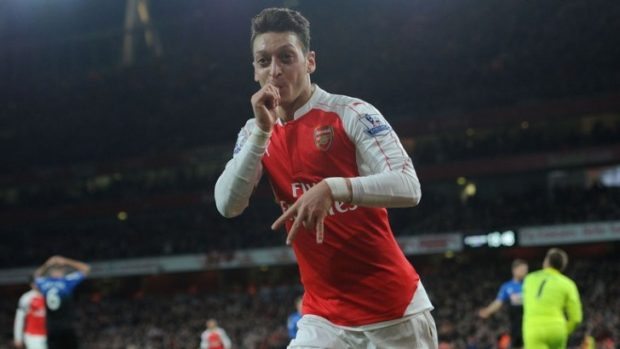 The Germany midfielder is demanding £250k a week

Mesut Ozil will keep Arsenal waiting until they meet again in the new year to continue negotiations over a new long-term contract to keep him at the Emirates.

The 28-year-old has 18 months remaining on his current deal and ongoing talks, which began at the beginning the campaign, have yet to reach a conclusion with the midfielder demanding a massive £110,000-a-week pay rise to remain in north London.

Arsene Wenger has attempted to hurry a deal between the club and player by suggesting that both he, and fellow contract rebel Alexis Sanchez, will be kept until their contract runs out – even if that does mean their key men leaving on free transfers.

However, it’s understood Ozil is ready to play the waiting game in order to get the contract he demands, with Real Madrid considering re-signing their former player when their transfer ban ends, conveniently, when the German’s contract runs out.

The Gunners are reportedly confident their midfield maestro will sign a new deal, with Ozil happy in London.

But Wenger wants his contract to be sorted as soon as possible and could fund a move for Germany international Julian Draxler in a bid to keep Ozil at the club.

Cash-strapped Wolfsburg are resigned to losing their biggest players and Arsenal are ready to compete with PSG for the £30 million Bundesliga star, while Juventus are reportedly also considering a move for the 23-year-old.