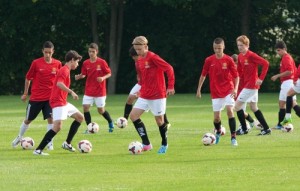 Best football academies in England? Manchester United’s academy is for surely worthy to be in the top four with alot of talent that has recently graduated from the academy with the likes of youngsters James Wilson, Andreas Periera, Tom Lawrence and Jesse Lingard. These players were recently added to the ‘A’ team and James Wilson has had no trouble fitting in and managed to score a brace in his debut match. The academy has not only recently been active but was also active in the years before producing quality players like David Beckham, Ryan Giggs, Gary Nevile, Phil Nevile, Paul Scholes,Tom Cleverly and Danny Welbeck .