AC Milan line up will be tricky to tell. Juve boss Pirlo might make some changes in the squad and hence the predicted line up can’t be too easily guessed. So let us see:

In defence, Donnarumma is expected to be between the sticks. Fikayo Tomori and Romagnoli are the natural choices at centre-half while Diogo Dalot and Hernandez provide cover from the flanks.

A three-man midfield Ismael Bennacer, Franck Kessie and Hakan Calhanoglu should feature in the attacking front.

In the wings, we can expect Saelemaekers with Ante Rebic and Zlatan Ibrahimovic up front as a striker. 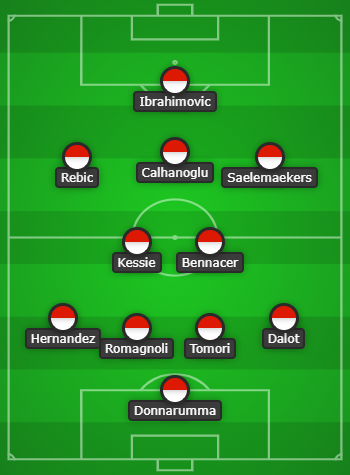 The Rossoneri are on a 17-match unbeaten streak on the road since losing a year ago, away to Inter.

Antonio Conte’s men have nine wins and just one loss from their 10 top-flight contests this season.