What will be the Juventus predicted line up for their clash against Sampdoria?

Juventus Predicted Line Up vs Sampdoria

Juventus predicted line up vs Sampdoria might be easier to judge since the 4-3-3 formation Sarri used before turned out to be successful. It is the one formation he has stuck to for some time now, previously at Napoli and Chelsea as well. He always wants to overpower the midfield with technically gifted players, dictating the tempo of the game with quick and springy passes. This also gives Cristiano Ronaldo the free reign that he works best in, since his days at Real Madrid. He gets to run in from the left while Federico Bernadeschi or Douglas Costa drills in crosses from the other flank.

Wojciech Szczesny is the natural selection in goal over Gianluigi Buffon. He is their number one choice over the veteran and should find himself behind a back four of Alex Sandro, Danilo, Leonardo Bonucci and Matthijs de Ligt. Bonucci missed the 2-1 defeat against Udinese through suspension but will be available for this tie.

Bentancur has really come of age in the system under Sarri. He plays the perfect role of defending and attacking both by taking up the right spaces tactically. Pjanic is the one the master midfielders who is important to the team. As for Matuidi, he is the tank that keeps the clock ticking and engine running for the Old Lady.

For this game, Sarri is likely to pick a trio of Rabiot, Matuidi and Pjanic for this tie. Even though Pjanic has secured a move to Barcelona, he is fully expected to fulfil his responsibilities in prior to his departure. Adrien Rabiot and Aaron Ramsey have featured heavily in the last few weeks which call for a well deserved break.

Higuain should line up centrally as an out and out number nine and will look to play in his wing forwards in CR7 and Paulo Dybala. Dybala is linking up extremely well with Ronaldo who is on song once again this season despite turning 35 earlier this year. 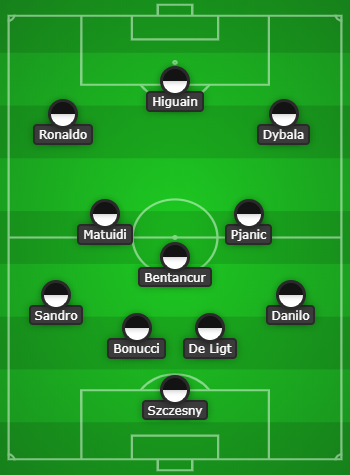 Here are details for the 36th Serie A tie:

Juve have allowed Inter Milan to catch up to them with 3 games still left to play in the season. A four-point gap might be enough to see them through but it needlessly raises the tension. Sampdoria are on course to finish well away from the relegation spot but will be aiming to make a statement on Sunday. Will they be able to gain a point this time or will Juve be the ones who will score the most number of goals?

Juve were without experienced defender Leonardo Bonucci against Udinese through suspension, but the Italian is available for this match and should slot back in alongside De Ligt.

There could also be a change at right-back with Juan Cuadrado potentially replacing Danilo, while Blaise Matuidi is in line to replace Aaron Ramsey in the middle of the park.

Giorgio Chiellini, Mattia De Sciglio and Sami Khedira are all still definitely on the sidelines for the Old Lady, while Gonzalo Higuain will face a late fitness test on a leg injury.

As for Sampdoria, Omar Colley and Ronaldo Vieira are both suspended due to the yellow cards that the pair picked up in the 2-1 home defeat to Genoa on Wednesday night.

Albin Ekdal and Felice D’Amico both injured, meanwhile, with the former picking up an ankle injury last time out which is likely to rule him out for the remainder of the season.

Juve and Sampdoria odds winner – (1 x 2) – who will win according to the odds?

Here we will give you an answer on the most frequently asked question about Juventus vs Sampdoria.