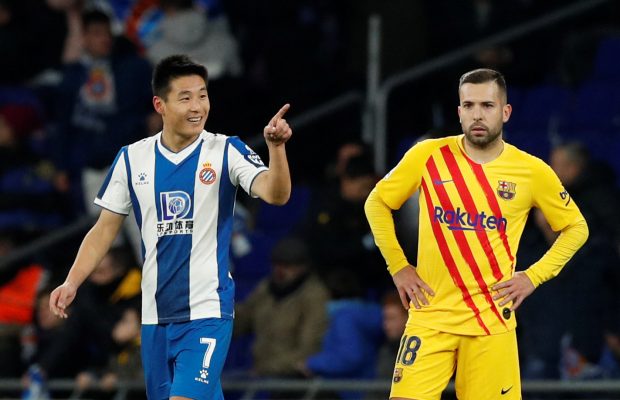 The Barcelona city derby ended with a 2-2 draw.

Upon scoring, one of the home players made history on Saturday.

Chinese star Wu Lei scored a late equalizer for Espanyol against city rivals Barcelona to secure a 2-2 draw at the Cornella El Prat on Saturday night. The goal marked a historic first for Chinese football as Wu became the first player from China to score against Barcelona in any competition.

The 28-year-old started on the bench for the hosts, who are bottom of the La Liga table, but they took a shock lead against the champions and league leaders. David Lopez put Espanyol in front before goals from Luis Suarez and Arturo Vidal put Barcelona ahead. The Chinese forward joined the fray in the 74th minute just before the momentum swung Espanyol’s way when Barcelona’s young Dutch midfielder Frenkie de Jong was sent off after his second booking.

1 – Wu Lei is the first Chinese player to score vs @FCBarcelona in all competitions ever. Historic@RCDEspanyol #Derby#EspanyolBarca pic.twitter.com/bZSyfn8bGz

Wu had an immediate impact, causing problems for the Barcelona defence and creating a number of chances. In just 20 minutes of action the China international had six chances. Then, with two minutes left of normal time, Wu made history. The goal was a huge talking point on Chinese social media and a trending topic on the Twitter-like Weibo, with one related hashtag generating 370 million views.

“I am very happy, not just because I scored but because of that assist,” Wu told Espanyol TV. “When we were warming up, Matias told me he was going to put me in with a through ball. After 10 minutes he played one to me and I scored.”