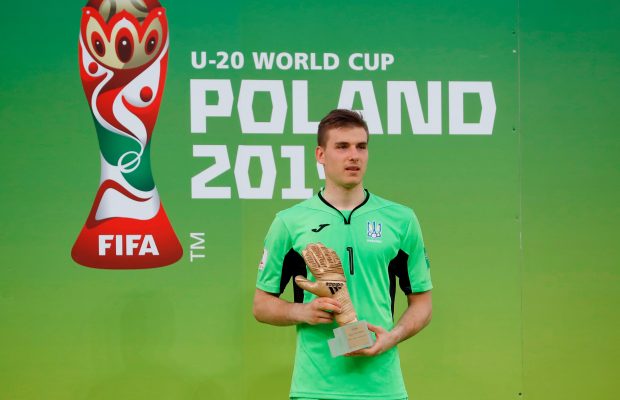 The highly-rated Ukrainian joined Madrid in 2018.

But he has since been shipped out on loans.

Real Madrid goalkeeper Andriy Lunin has joined second division side Real Oviedo on loan until the end of the season. Lunin had not played in La Liga on loan at Real Valladolid as he has not been able to place the club’s number one goalkeeper Jordi Masip, with the news now confirmed that he is now going to the Asturian team.

Furthermore, the Ukrainian – who joined Madrid from Zorya in a €7.5m deal in the summer of 2018 – only started four La Liga games last season at Leganes, where he could not displace Ivan Cuellar. MARCA this weekend highlighted how the shot-stopper would return to Madrid after Valladolid completed the signing of Jose Antonio Caro from Ponferradina.

It had been reported last month by Cadena Ser that high-flying Segunda side Almeria would be looking to land the goalkeeper. The Andalusian club were taken over by a wealthy Saudi Arabian businessman Turki Al-Sheikh this summer and have enjoyed a period of sustained investment since.

Indeed, former Madrid player Guti is now the new Coach of Almeria and that could ensure Lunin joins the club – with another Madrid goalkeeper, Luca Zidane, on loan at Segunda rivals Racing Santander. However, Lunin’s move to the Segunda is to Oviedo. The 20-year-old will finally hope to prove his talents in Spain during the second half of the season, with Oviedo languishing just a point above the relegation zone having conceded the second-highest number of goals in the division.