The things we love about the wonderful game of Football is the amazing talent within the game, The Skills, the amazing plays, set pieces and more, But the one thing we can’t get enough of is a good signature move. Whether it be Ronaldo‘s famous stance before he takes a free kick, or Messi’s signature dribble past defenders or Zlatan‘s freaky way of scoring, we just love to see it, So we decided to run down the Top 10 Best Signature Moves In Football.

So who do you think of when you think Top 10 Best Signature Moves In Football? Who are the players that have stuck in your mind over the years?, The footballers that leave such a big impact with their signature move that you simply will never ever forget it. They mught even be on this list.

Not too long ago we also published the Top 10 Best Football Strikers Ever and The Best Current Soccer Players 2015, you might want to check out these two gems after this list. great researched countdowns.

But for now lets run through the Top 10 Best Signature Moves In Football. 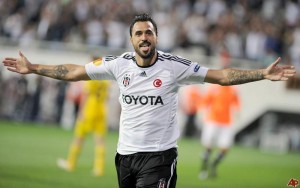 Portuguese striker Hugo Almeida kicks off this list with his signature move the ‘Driven Shot‘. Although he is not the only player to have pulled off this technique, however, he mastered it that much he owned it in the end. He has quite frequently scored goals using this move. Hugo Almeida is famously known for scoring scorcher of a goal during at Porto against Inter Milan way out from 35 yards during the 2005-06 Champions league .