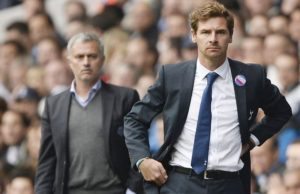 Ex Chelsea manager Andre -Villas-Boas has admitted that he loved Manchester United manager Jose Mourinho until he fell onto his bad side.

Villas Boas worked alongside Mourinho as his assistant at both Chelsea and Porto before pursuing his own managerial career with Portuguese side Academica before a spell in charge of Chelsea and Tottenham.

Villas-Boas admitted that Mourinho was the man who inspired him to pursue his own managerial career but not for the right reasons after he and Mourinho had a bust up while working together at Inter Milan.

“In my formative moments, working with Jose was the best time of my life. I was able to lean to many things and working with him takes you to another level,” Villas-Boas said at the ASPIRE4SPORT and the Aspire Academy Global Summit in Amsterdam.

“You fall in love with him and he becomes your idol. I wanted to be like him, know everything that he knew and absorb all the information he was giving.

“Then you fall on the wrong side of Jose and that’s when things change and you realise that you’ve been blinded by someone. He has this fascinating capability of getting the best out of you, which has good or bad consequences for people.

“My consequences were that as a result of the argument or disagreement we had, I started my coaching career.”

Like Mourinho Villas Boas followed in his footsteps in becoming Chelsea manager in 2011 after a successful spell as Porto manager, but he then joined Chelsea’s London rivals Tottenham after being sacked in 2012.

“The Chelsea experience was too much too soon,” he said. “I wasn’t flexible as a manager at that time. I was communicative, but I wasn’t flexible in my approach. At Tottenham I learnt to be different.”

Despite a successful spell at Zenit St Petersburg, Villas-Boas left the job earlier this year winning the Russian cup in his final season.