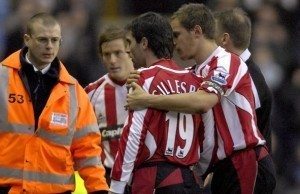 Closing down on the top four is Keith Gillespie who was sent off for Sheffield United for an elbow on Stephen Hunt during a throw in against Reading in 2007 just after 12 seconds. Kieth is known for his aggression on the pitch and he only lasted 12 seconds before he was dismissed for a harsh challenge. It is one of the Fastest Red Cards in English Football.