4) Even The Best Have Bad Days 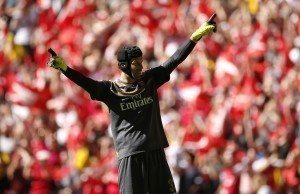 When Arsenal fans found out they had signed Petr Cech, rightfully so they went absolutely mental. He’s a world-class ‘keeper and something they’ve lacked since Jens Lehmann.

However, Cech‘s Premier League debut will be one to forgot as he made two massive errors for both West Ham‘s goals.

The first, the veteran completed mistimed the cross and punched thin-air before Cheikhou Kouyate headered home into an empty net, which was then followed by a long-range shot that left him stranded after moving the wrong way.

No doubt Cech will prove to be a great signing for Arsenal in the long-run, but today is certainly a game to forget for both the ‘keeper and the club.