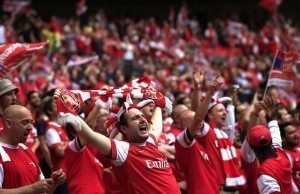 Just moments after the defeat, #WengerOut was trending on Twitter. Yes. This is true.

The first game of the new season ends in a defeat, and Arsenal fans are already calling for Arsene Wenger‘s head. Football is well and truly back.

Not only was Wenger scrutinised, as was Petr Cech, Olivier Giroud, Mathieu Debuchy and Mesut Ozil all for their performances during the season opener.

Just last week they were lifting the Community Shield and saying they were title contenders, and now they are calling for drastic changes on and off the field.