Hallelujah the Premier League is back.

Yes the 2015/2016 campaign got underway yesterday with six games played throughout, starting at lunch-time with Manchester United vs Tottenham Hotspur and ending in the evening with Chelsea hosting Swansea City.

Now although it’s only the first game of 38, there are still things we can learn from the first day of Premier League action and here at SillySeason, we are going to look at what stood-out for us during the first few matches.

In a day where there were wins for Manchester United, Aston Villa, Leicester City and Crystal Palace, we also saw Chelsea kick-start their campaign with a draw and Watford pick up a respectable point away at Everton.

But what are the five points that stood out for us?

5) Cech Could Be Missed 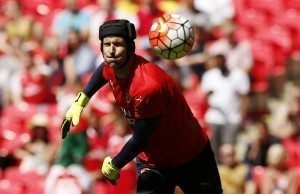 The last thing you want to see as a manager once you’ve sold your world-class back-up goalkeeper is your new number-one getting sent off on the first day.

Yes he reluctantly sold Petr Cech to Arsenal after Roman Abramovich allowed the deal to happen and Thibaut Courtois then got sent off against Swansea City at Stamford Bridge and will now miss three games.

Courtois brought down Bafetimbi Gomis in the penalty area and saw a straight red for his challenge, which meant new signing Asmir Begovic had to come on to face the penalty.

Begovic is still a top-class goalkeeper don’t get us wrong, but he’s not Cech, and you can bet Mourinho is now wishing he still had the reliable veteran to have in between the sticks for the next three games.