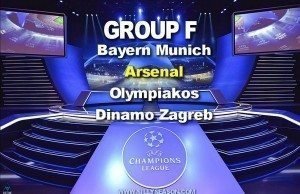 Arsenal qualified for the Champions League after finishing third in the Premier League; they also capped off a successful season by retaining the FA Cup. The Gunners have a fairly tough group for this years tournament, facing the likes of Bayern Munich, Olympiakos and Dinamo Zagreb.

Bayern Munich – Pep Guardiola‘s men are considered to be one of the main powerhouses in world football, but the five times winners are yet to win the crown under the ex-Barcelona manager’s guidance.

They will be expected to finish top of this group ahead of Arsenal, especially when their squad contains players such as Thomas Muller, Arjen Robben, Franck Ribery and Robert Lewandowski.

They qualified after winning the Bundesliga for a record 25th time and have their sights set on a sixth European title.

They must travel to North London to face Arsenal in this year’s group stage, but the last time they won the trophy in 2013 the final was held in North London at Wembley Stadium.

Olympiakos – The Greek side qualified after winning the Greek Super League for the 17th time in a row.

Marco Silva‘s team are always tough to play against, but the recent decline in Greek football hasn’t helped their competitive edge coming into these high-pressure games in recent times.

It’s still a tough away trip as some Premier League teams have found out; and let’s not forget they have reached the quarter-finals of this competition.

Keep an eye out for ex-Leicester City midfielder Esteban Cambiasso.

Dinamo Zagreb – Zoran Mamic‘s team qualified after winning their qualifier against Albanian side Skenderbeu Korce 6-2 on aggregate. They had to play a two-legged qualifier despite winning the Croatian league title last season.

They have never won a European competition but that doesn’t mean they should be underestimated; it will be a tough place to travel to because of it’s intimidating atmosphere.