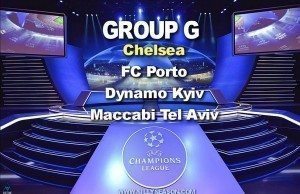 Chelsea qualified for the Champions League as Premier League champions and have been drawn in a group with FC Porto, Dynamo Kiev and Maccabi Tel-Aviv.

Porto – The Portuguese side qualified as runners-up in the Primeira Liga and their head coach Julen Lopetegui will fancy their chances of progressing to the knockout stage.

They have won the European Cup/Champions League twice in their history, the first time in 1987 and the second time in 2004. Their most recent title in ’04 came under the leadership of the present Chelsea manager Jose Mourinho.

They have made some shrewd signings this summer, securing the signature of Real Madrid legend Iker Cassilas and also capturing rapid Barcelona winger Christian Tello on loan.

Their manager is Serhiy Rebrov and he will be looking towards the home games to try and pick up his points, it will be a tough place to travel to.

Their star man is Andriy Yarmolenko, the tricky winger can cause opposition teams all sorts of problems. However, he is strongly linked with a transfer to Everton so it remains to be seen if he will be playing in the Champions League.

Kiev are another side to have never won this competition.

Maccabi Tel-Aviv – The Isreali champions qualified on away goals after drawing 3-3 on aggregate with FC Basel.

They are another side who will have to rely on their home form if they have a chance of professing to the last 16.

Their manager is Martin Bain and the key player he has at his disposal is highly rated Isreal international striker Tal Ben Haim II.

They haven’t won the famous trophy either.