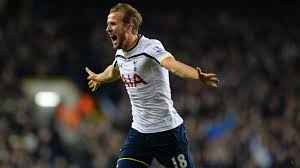 Tottenham striker Harry Kane is set to sign a new long-term deal at Tottenham that will see him become the club’s highest-paid player, and doubling his currently weekly wage.

Kane finished last season as the Premier League’s Golden Boot winner, after netting 25 league goals for Spurs as they pushed Leicester City for the Premier League title, and Tottenham want to secure his long-term future.

Although speculation, surprisingly, hasn’t gathered about his future at White Hart Line, despite taking the league by storm last campaign, the north London club want to keep away potential suitors by offering him a new deal, just seven months after putting pen to paper on fresh terms.

Talks between the club and Kane are already understood to have begun, while teammate Christian Eriksen is also set to earn a new £70,000-a-week deal at the club, after a drawn-out process of negotiations.

Daniel Levy has been criticised by some fans in recents weeks for the lack of movement in their bid to tie down Eriksen to a new deal, but it seems two of Spurs’ key players could sign new deals at, near enough, the same time.