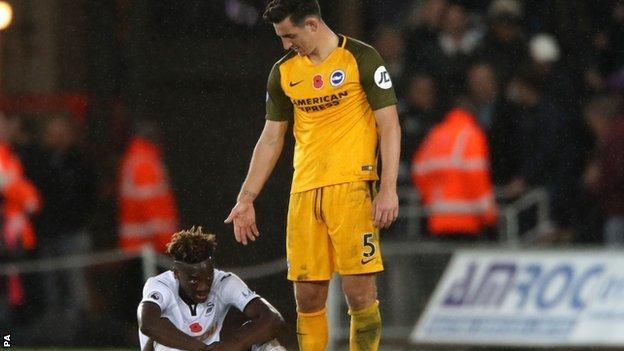 Brighton & Hove Albion defender Lewis Dunk insists his dream will come true if he earns a place in the England starting lineup.

This is Dunk’s second call up and he is hoping to make it count. The lanky defender wasn’t an automatic choice first time as he had to fill in for injured James Tarkowski.

He wasn’t featured in any of the games against Croatia and Spain but the defender is expecting to get his first start for the Three Lions as they are scheduled to face the United States and Croatia.

Dunk has been the backbone of the Seagulls defence and his impressive performance for Chris Hughton’s side got him his first England call up. Dunk said, “Every kid running around the park now wants to do that. Hopefully I can make that dream come true and it will be a very proud moment for myself and my family and all the coaches that have coached me so far.

“I’m thankful of being where I am at the moment but hopefully I can go one step further.”

“I’ve had to progress. If you want to perform in the Premier League week in, week out, you have to improve.

“It’s been a big learning curve. Last season was a massive learning curve and this year I feel more comfortable in it and hopefully I can keep on improving.”