Being the busiest club in the summer transfer window, fans will surely expect a lot from Chelsea as they aim to close the gap for a title finish next season.

With the big signings done and to be done, Frank Lampard will have a lot of work to do on re-orchestrating his starting line-up.

There will be names who will get the nod and also the snub. Surely, players will now do everything to fight for a place in the starting line-up. Given their deep line-up, here is how Chelsea’s Starting XI may look like:

With a balanced distribution of players, Lampard may possibly stick with this one, with an option for one or two midfielders to support the defence in retrieving the ball.

Given the attacking full-backs as a new norm in the game, the centre-backs should be very watchful, with the support of the defensive midfielder.

Yes, I intentionally left the goalkeeper position blank, no pun intended. With the uncertainty of Kepa Arizzabalaga’s future with the club, and Willy Caballero obviously not enough to fill the gaps, the race for Chelsea’s number one between the posts is still up for grabs.

Surely, Lampard will make the most out of his newly-signed left-back who displayed defensive prowess with Leicester. Chilwell will look to carry over that classy performance with a little caution due to injury.

Thiago Silva’s veteran experience will be key to the maturity of the Blues’ defensive line with his tough mentality. Though the Brazilian is up to show that he still got game, Lampard may opt not to include him as a starter every game, given Silva’s relatively advanced age. Kurt Zouma will be a reasonable option to rotate with Silva.

Antonio Rudiger may be given a thumbs up by Lampard, with hopes that he will bring his experience as a starter in the Nations League for Germany to Stamford Bridge. He will also be aiming to regain his form.

Cezar Azpilicueta will be looking to voice out his leadership in a louder tone this season. He will also look to add up more experience to the defense.

Both full backs may opt to help in the attacking play, but will be a risky one once the ball is with the opponents, especially if the back three set-up isn’t that firm. Should this happen, they should be always mindful of their defensive roles and go back immediately.

Kovacic may get the nod from Lampard with his good display of midfield play. He will also look to regain his form next season.

Kante will look to get back to his old self following an injury-laden season. In spite of that, he still maintained a good tackling rate of 45%.

A dangerous playmaker, Havertz will surely bring havoc to the opposing midfield. Both possess killer passing skills that may open the defense widely.

Kante may possibly stay put in the defensive half to regain the ball for the Blues, with Kovacic and Havertz setting the offensive charge.

Following a great start to his Chelsea career, Pulisic is looking to add more threat on the wing with his classy passes and skills. The American is also a goal-scoring threat.

Proving to be deadly on the wing is Ziyech who possesses good crossing abilities and can also charge the ball inside the box.

Leipzig’s former goal-scoring machine Werner will be eyeing to shatter the back of the net for Chelsea with his exceptional pace that leaves defenses catching their breath. His positioning IQ also leaves defenders questioning themselves.

With the full-backs possibly providing the play, the wingers can crowd the box to help in opening the opposing defense.

With certainty, Chelsea fans will be fully hopeful because of what Lampard has done this summer in the window. They will be eager to prove that “Blue Is The Colour” in London and in the whole of England. 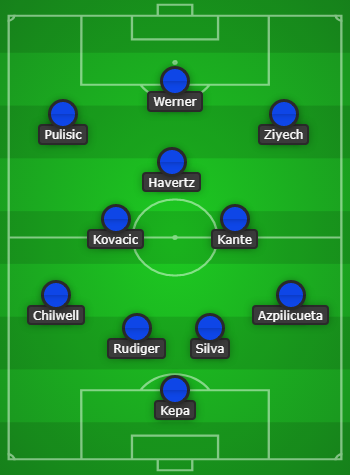 READ MORE: PROJECT REBUILD: How Chelsea Have Looked In Pre-Season