We discuss the title, relegation and the Champions League after eight games of impacting Premier League football. 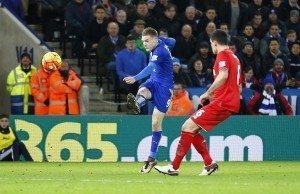 Leicester City continued their astonishing journey at the top of the Premier League table with an impressive 2-0 home win against Jurgen Klopp’s Liverpool, in front of The Foxes’ second highest attendance this season.

The two sides found themselves level at half time, before an incredible first-time volley by Jamie Vardy from outside the box handed Claudio Ranieri’s side the advantage. The England international then went on to complete his brace punishing Liverpool’s defence with a classy finish from inside the six-yard box.

The Foxes were on top for majority of the stages during the match, but Liverpool were hardly poor. Clearly, it was not the best display from Liverpool this season, but the difference between both sides must be emphasized on Leicester’s pure brilliance throughout the 90 minutes.

The win gives Ranieri’s team more confidence and belief ahead of an almost certain title challenge come the end of the season.