Both stars have produced some top performances this campaign, However, Rush believes that Coutinho, who has averaged a shot accuracy of 53% in the Premier League, has been better.

Rush said: “I’m biased because I watch him play a lot but I think he is the best in the Premier League.

“Hazard is doing well at Chelsea but Coutinho is outperforming Hazard this season. He is scoring more goals with more assists and he has been fantastic. He was good last year but he’s kicked on now is a much better player.” 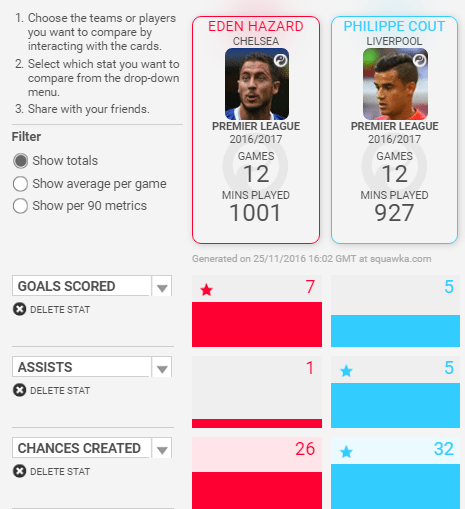 Hazard sometimes struggled in the early stages of the season but has picked up form following manager Antonio Conte’s decision to switch to a 3-4-3 formation, which has seen the Belgian no longer has to track back with as much regularity as he previously did.

Meanwhile, Coutinho, has been one of a few attacking players crucial in Jurgen Klopp’s  Liverpool side this season, with the Reds’ displays suggesting that they can challenge for the Premier League title.