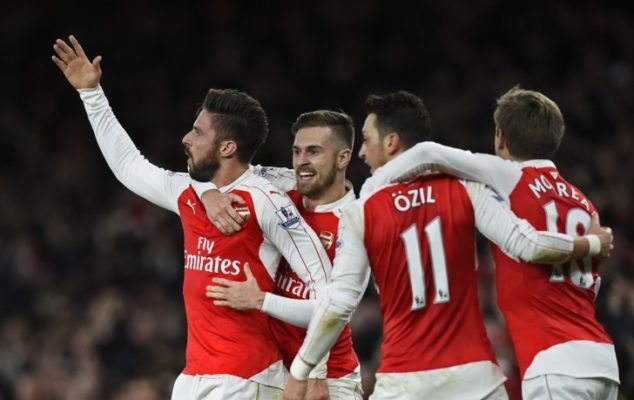 The Premier League reaches its halfway stage in the latest round of fixtures, as Monday’s encounters provided goals aplenty in the eight games which took place up and down the country.

The most highly anticipated game of the day at Old Trafford, which was the evening kick-off between Manchester United and Chelsea failed to live up to expectation – in a fixture which ended in a goalless draw.

It is a result which does no favours to the under-pressure United manager, Louis Van Gaal, with the draw against the West Londoners leaving the Red Devils in sixth position, five-points off fourth placed Manchester City.

Both sides had their respective openings at goal, United hitting the post twice in the second-half, while up the other end, the hosts had goalkeeper David De Gea to thank on several occasions throughout the evening.

Guus Hiddink’s Chelsea move up to 14th with the stalemate in Manchester.

In the second of three evening kick-offs on Monday – Arsenal moved to the top of the table following a comfortable 2-0 win over AFC Bournemouth at the Emirates Stadium.

The Gunners bounced back in confident fashion following the 4-0 defeat at Southampton on Boxing Day, and were ahead after 27 minutes, courtesy of Gabriel, who profited from Mesut Ozil’s pass to score his first goal in English football.

Ozil netted a goal of his own just past the hour-mark, interchanging well from a one-two with Olivier Giroud, to beat Artur Boruc in the Cherries goal.

Bournemouth drop to 16th following their defeat, while Arsenal will be hoping to continue their time at the summit.

Arsenal’s North London rivals, Tottenham Hotspur, climbed to third in the standings, thanks to a dramatic late win over ten-man Watford at Vicarage Road.

It took Mauricio Pochettino’s man 17 minutes to open the scoring at the home of the hornets, when winger Erik Lamela diverted past Gomes in the Watford goal.

Nathan Ake was sent off for the hosts late on into proceedings, before Korean Son Heung-Min flicked Kieran Trippier’s cross into the net with just a minute left to play.

Stoke City continued their fine form by coming out on top in a thrilling encounter away at Everton.

Xherdan Shaqiri opened the scoring for the Potters after 16 minutes, though the Swiss’ strike was cancelled out by Romelu Lukaku’s strike with 22 minutes on the clock at Goodison Park.

On the stroke of half-time, Shaqiri looped a stunning half-volley over a static Tim Howard to notch his brace, and regain the advantage for Stoke.

Lukaku beat Jack Butland to restore parity for the Toffees with 25 minutes to play – before Gerard Deulofeu completed the turnaround five minutes later.

Mark Hughes’ side won it by scoring twice in the final nine minutes, with Joselu and a Marko Arnautovic penalty in injury time securing maximum points.

Everton are 11th in the top-flight, while Stoke, who have won three out of their last five, move ninth.

Johnny Howson’s strike 24 minutes in separated the two sides for over an hour, before Dieumerci Mbokani-Bezua settled the encounter three minutes from time, with a close-range header.

West Ham United recorded their first three-points in over two-months with a hard-fought 2-1 victory against Southampton at Upton Park, in the third evening game.

The Saints, buoyed from their emphatic win over Arsenal two days earlier, took the lead with the game just 13 minutes old, when Carl Jenkinson put through his own net.

Michail Antonio leveled in bizarre fashion for the Hammers with 70 minutes on the clock – the Hammers would go onto win it late on, when Andy Carroll glanced in from close range.

Following the victory, West Ham move up to seventh, while Southampton remain in 12th position.

Darren Fletcher’s late header gave West Bromwich Albion all three-points against Newcastle United at the Hawthorns, a result that sees Albion up to 13th, and the Magpies drop into the final relegation place.

And finally, Crystal Palace and Swansea City played out a 0-0 draw at Selhurst Park.