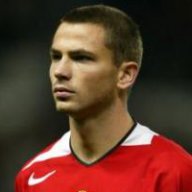 Eighth on the list is Phil Bradsley who is currently playing for the Stoke City.  The Scottish player was at Manchester United for quite some time, he failed to impress during his five seasons at  United and only managed to make 18 appearances for the Red Devils. It was not that the then youngster Phil Bradsley was not good enough but he lacked game time due high competition for his place with Gary Neville proving to be a better player than he was. Phil Bradsley moved to Sunderland in 2008 and filled the right back spot before joining Stock City in 2014.