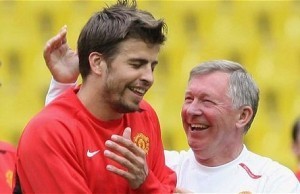 In runners up is the Spaniard Gerard Pique who joined Manchester United from the Spanish giants FC Barcelona on a free transfer. Manchester United signed for free due to the fact that he had not yet signed a professional contract with the Catalan club. Pique was at Manchester for four seasons and only managed to make 23 appearances for the first team. Manchester United let the Spanish defender go in 2008 to join his boyhood club FC Barcelona as a long term replacement for Carles Puyol . Ever since joining Barcelona Pique has established himself and is one of the best central defender in the world.