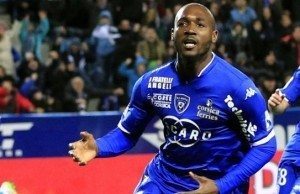 At number 9 we have Giovanni Sio, an Ivorian footballer who currently plays for Stade Rennais FC. Since the start of the 2015/16 season, Giovanni has managed to score 4 goals in 4 matches and making that his total for the season so far. During the last match against GFC Ajaccio which was played on 23/09/2015, GFC Ajaccio took the lead nearly before the half break but Giovanni came through for the team when he scored a last minute goal which helped his team end with a draw.