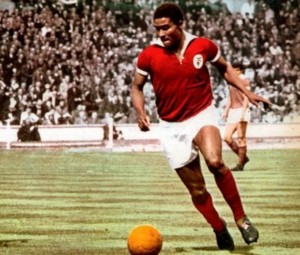 Eusebio was a Portuguese footballer who played as a striker notably for Benfica from 1960-1975. The Portuguese striker is regarded as one of the greatest footballers of all time after scoring 749 goals in 745 matches at club level and 41 goals in 64 caps for the Portuguese national team making it a total of 790 goals in his career. Eusebio was nicknamed ”Black Panther” which meant ”the King”.

Lets talk about his venomous right foot! Oh what a hell of a foot this player had not only did he have a powerful right foot he was also known for his speed, great technique and his athleticism.

During the 1966 World Cup he scored nine goals which was the highest by any player which helped Portugal reach third place. In 1965 he won the Ballon d’Or award for European footballer of the year.