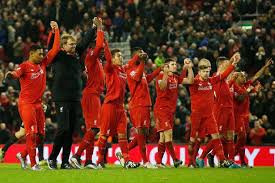 After previously stating he felt ‘lonely’ with crowds leaving Anfield early in a 2-1 loss to Crystal Palace, Klopp gathered his players to thank the Kop for a tremendous atmosphere at the end of a dramatic 2-2 draw with West Brom at home, after a late equaliser from Divock Origi. Mocked by other fans, this symbol of appreciation is something brought from Germany, and was applauded by the press and Liverpool fans.