3 days after losing the Capital One Cup final to the same opposition, Liverpool went out and dominated Manuel Pelligrini’s Man City at Anfield, thanks to goals from Adam Lallana, James Milner and Roberto Firmino. It was a game that was almost as impressive as the 4-1 win at the Etihad earlier that season. 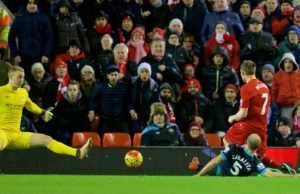