An incredible first half performance from the Reds saw them 3-0 up by half time thanks to a header from Steven Gerrard and a brace from Daniel Sturridge. Luis Suarez added another in the second half, capitalising on a mistake from Phil Jagielka, and Daniel Sturridge missed a penalty on a night Anfield went crazy. 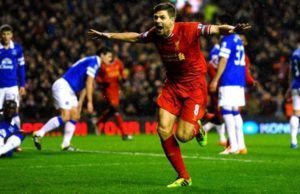