It was billed as a title decider, but a later twist in the tale meant that City won the war despite losing this battle. However, this game brought brief ecstasy to the Kop. With Liverpool needing a win to stay in the title race, Raheem Sterling and Martin Skrtel put Liverpool 2-0 up, but tense times came as City pulled it back to 2-2. However, a mistake from Vincent Kompany with 12 minutes to go allowed Phillipe Coutinho to fire home a cool winner and for Anfield to go wild. 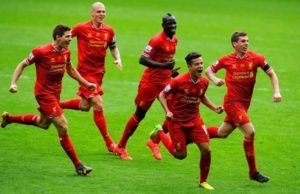