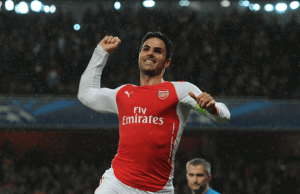 The Arsenal man has been wrongly rated by FIFA . The Spaniardwho is now 33 should not have being a big deal to rate but to FIFA it seemed to big a big problem as the mid fielder was given an overall rating of 81. The former Everton man had his days and they seem to be long gone and FIFA of people should have seen this. The mid fielder who was upgraded from having a rating of 80 to 81 only made 11 appearance last year and quite frankly it goes to show that their is no need of up grading but need for degrading.