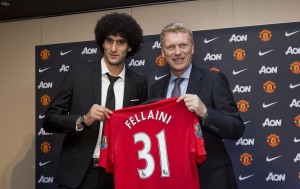 This one was hard to include after his season under Louis Van Gaal, but not many people will think Marouane Fellaini is worth £27.5million.

The Belgium midfielder followed David Moyes from Everton to Manchester United and just like the manager, he flopped badly at Old Trafford.

During his first season with United, Fellaini failed to register a single goal or assist.

However, last season was a different story for the tall midfield-man as he looked like his former-self under Van Gaal with a new, advanced role.

Still not sure he’s done enough to convince people he’s worth near £30m mind.