THERE ARE SOME WORLD CLASS PLAYERS IN THIS LIST! 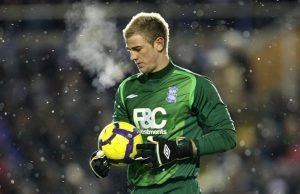 The England international would have solved Arsenal’s goalkeeping crisis before Petr Cech arrived at the Emirates Stadium.

Wenger recalled: “I remember when Hart played at Birmingham, I asked about him and they told me he is at Man City.

“I thought he would be the keeper there. He has something that is needed for a goalkeeper to play at a big club.”