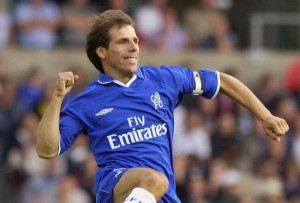 One of the most gifted players to ever embrace the Premier League.

The stuff Zola could do with a ball was unreal, but sadly for him, his time at Chelsea came before Roman Abramovich and before the trophies came on a regular basis.

Chelsea was Zola‘s only club in England and he spent seven years there, from 1996-2003.

The Italian made over 200 appearances for the West London club, but failed to win the Premier League title.