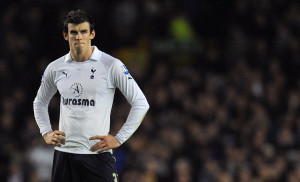 When Gareth Bale was first on the scene at White Hart Lane, he was a losing magnet. He was used at left-back and every time he played, Spurs would lose.

However, that drastically changed in one season and he turned into one of the world’s best wingers before finalising a move to Real Madrid.

Bale became the most expensive player when he secured to switch to Spain, toppling what the club paid for Cristiano Ronaldo.

Despite his impressive performances in England, Bale couldn’t spur Tottenham to a Premier League title win.